My yokes finally came in. As I'd done a lot of the fabrication while waiting 3 weeks for my 'next day' order, it only took me 3 and a half days to assemble it, correct some design errors, and photograph it. 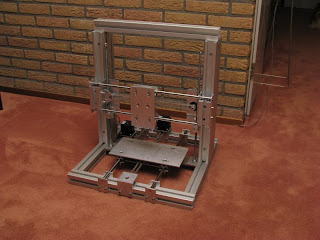 Some changes from the Inventor model below:
I managed to make my Z axis motor work at the back with my (mendel standard) belt length. I moved the vertical assembly forward by 10mm or so to get it right. I also decided not to waste my slider channel and 44x88 extrusion by cutting it short, so I have over 32cm of vertical build volume (after I add a build platform). My X is 30cm and Y is 23.5cm
I'm quite happy with this bearing design.. I can see my 12mm bearing bars flex when I load the axis, but no slop from the bearings at all. It's very slippery. If I change anything, I'll have to get stiffer linear rails first. 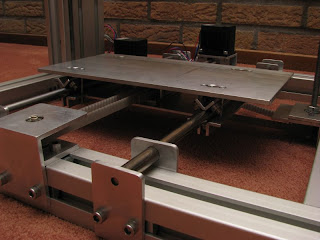 In order not to limit my X travel, I had to come up with a narrow belt clamp. Hopefully this will hold, seems like I have quite a bit of clamp pressure. (the ends are just tucked in behind the screws below) My carriage makes it to within a couple mm of each end. 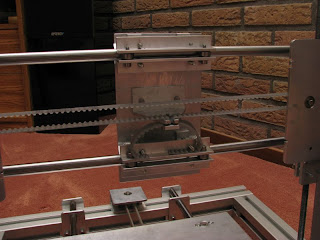 This view, looking up from the bottom. shows my 1:2 timing belt ratio, making my leadscrews turn twice for each rotation of the motor. I've tested the motor with a pololu at half current (ish) and get plenty of Z power, so that's a relief. 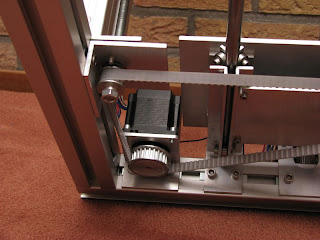 This is my Lead-screw nut clamp.. I think it will slide out if (when) I crash my z axis against the bed.. hopefully...
I ended up welding a tab on, rather than remake the part when I discovered the clamp interfered with the X carriage. 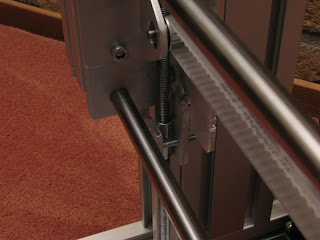 I'm not so happy with my Z sliders. There is more movement here than I would like, and they cost a lot, with the guide-rail (30 euros), and sliders (36 euros each).. I can tighten them up some more, but then I'm worried that they'll wear out faster.
I would go with my X and Y bearing arrangement, if I were to do it again, or something more conventional.. 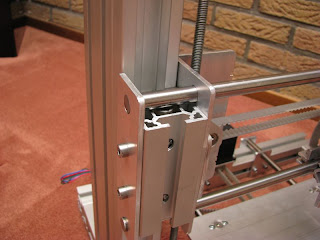 Other changes that happened after I started assembly... I drilled through the front of my X carriage and reversed the machine screws so I could adjust the Z slider mounts while they are on the bot... this allowed me to tighten them when everything is lined up. I've also decided not to overdo the countersunk cap screws... I get more adjust-ability by leaving them as regular socket head cap screws.
Otherwise it pretty much matches the model... a good thing I think?

After much deliberation, I've decided to name it XCbot.
Posted by araspitfire at 8:49 AM