It may be early to post this, but I'm still waiting for my hardware order to come, so I have been playing with what I can. (also, I expect that once my hardware arrives, I'll be too busy to blog much)
I really like nophead's extruder heater design. I figured that It would be possible to build it without having a lathe on hand, so had a go. 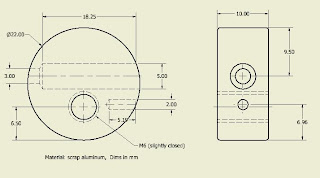 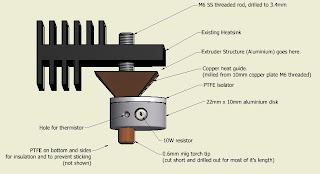 The heater block is made from some scrap 22mm round-bar (It was a door handle in an earlier life). I cut the end square, and drilled the resistor and thermistor holes before cutting it to length. This allowed me to have a big handle for holding the bar straight in the drill press while drilling the off-center holes. I then cut it off to 10mm length and by sticking a 5mm diameter bit of round-bar in the resistor hole to hold it, I drilled the 5.5mm through hole for the nozzle and SS insulator. I tapped it to a tight tolerance (didn't open up the thread all the way), so that my fittings would be tight. 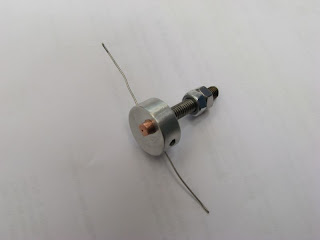 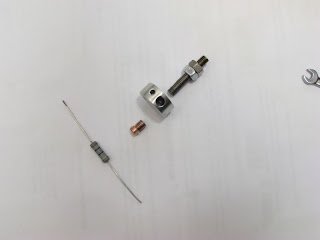 The nozzle is a .6mm MIG torch tip. It has M6 thread. I drilled it out to 3mm, then cut it off slightly longer than the bore. The exit hole is actually quite a bit larger than .6mm (sliding fit for mig wire), so I may close it up if I need to. I tried squeezing the end of the tip in a vise, but it didn't decrease the hole size, other than flattening it. Once I rounded the hole by squeezing around the circumference, the hole was not much smaller than original. I can melt the hole closed with my tig torch if needed and re-drill it to less than .5mm.

To work with the tip (and the isolator), I simply drilled and tapped a hole in some scrap metal and screwed the tiny pieces in to hold them.

The isolator was more trouble.. Having found some M6 threaded rod (BZP) at Ikea, I drilled it out to 3.3mm without effort... The hole stayed very close to center all the way though. This allowed me to believe I could easily do this without a lathe.

Not quite so easy was the SS threaded rod I then bought to make the isolator. I found with my cheap drill-press that I was not achieving depth without coming out the side of the rod. I even tried drilling in both ends, but that didn't help. For my last try, I kept rotating the fixture 180 degrees as I drilled, this maintained the hole more on center. I'm confident that I could do better, and for 1.5 euros for 1m of the threaded rod, it would be cheap to keep trying. Even though the top hole is slightly off center, I think this one will work fine. I tapered the bottom hole, using a tapered reamer like nophead did. 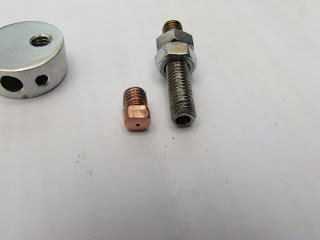 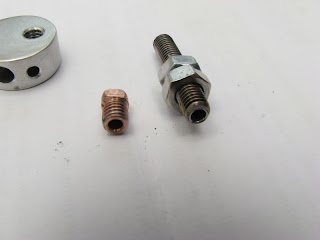 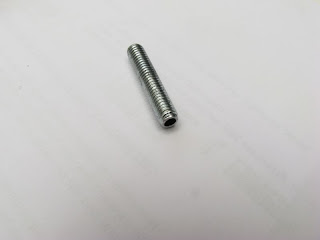 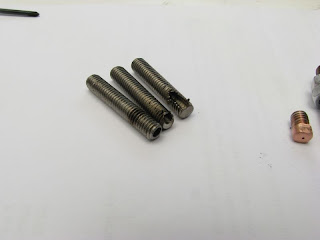 I pressure tested the assembled unit, and got no bubbles from the two threaded joints at 100PSI, do am hopeful that this won't leak (.... cold... not sure what will happen when it gets hot). The Copper nozzle deforms against the SS rod end forming a seal I think.
For the top, I intend to M6 thread some 10mm copper plate I have to increase the heat removal from the upper part of the isolator. I may dremel some material from the isolator just above where it enters the heater block if needed. I'll put a layer of PTFE between the block and the copper heat channel. I have a nicely sized aluminum heatsink from an old PS that I intend to use forced air cooling on with a 40mm fan. Silver grease between all the necessary bits should keep the heat moving where it's supposed to.
Because the block is circular, I should have no trouble drilling a bit of PTFE rod to fit around it as an insulator, I just need a 22mm drill..... I may try gooping it up with the high-temp gasket maker that I'll use to insert the thermistor and resistor.

So, in short it is possible to make a resistor block extruder heater, with SS isolator and mig nozzle with only a drill press and some hand-tools. I think it's much easier to drill SS than to run a die along it, so starting with threaded rod seems logical if you can drill more or less true. Mig tips are cheap, and if I want a smaller hole, it's quite easy for me to close it up.

The tools I used for this are not exceptional.. A cheap and nasty Chinese drill press, an M6 tap, a chop saw (though careful hack-sawing would easily work), some bits of scrap metal for holding the tiny bits, and a belt sander (optional).

Whether this works as a heater or not, time will tell.
Posted by araspitfire at 6:12 AM