Tying it all together: Easy HotEnd.

As mentioned early on my journey, I found a way to make a stainless steel isolator and a resistor heater block and a nozzle, using not much more than a drill-press. At the time, I had no way of testing my isolator, but since, I've printed most of a Mendel using it and am happy. It works great.

I started printing my mendel using a PTFE isolator, but was experiencing leaks, and went back to the all metal design.

A recent image of my current iteration: 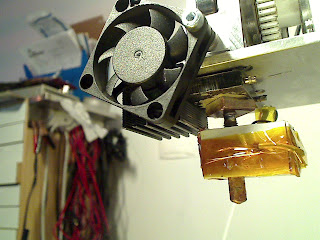 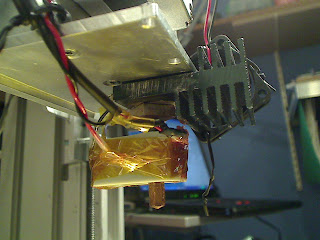 You can see that I have a slightly longer MIG tip as nozzle, cut off with a tubing cutter so that the hole shrinks. The M6 thread on that is fully tightened (using flats files on by hand) into my aluminium resistor block. The block has 2 large holes and a shallow one for the thermistor.. one of the holes is M6 threaded right through the block.

I have surrounded the block with PTFE plate 1mm thick, and wrapped it with kapton. Kapton tape only would likely be enough, but the layer of PTFE makes it harder to get burned. I have secured the (etched one side) PTFE to the block with permatex high temperature gasket maker. This holds the resistor in and adds more insulation. I also secure the thermistor with gasket maker, and a layer of kapton holding it in. From drilling to heat, less than an hour has passed for using this as the gasket maker doesn't mind 220 degrees C before curing.

Inserted into the top of my aluminum block is the stainless steel threaded isolator. It is secured with a check-nut (not shown).

It is an M6 threaded rod drilled out as per the above blog article. I used a drill press and a hand drill to re-work this bit of threaded rod.

One special tool I had was a tapered reamer to open the bottom of the 3.2mm hole into a taper.. nophead seems to think this is important, and after playing with a standard brass nozzle, I am inclined to agree. Force to push the feed-stock through this hot-end is much less than through my bought brass one, with the same exit hole.

You can see I also ground down part of the isolator to reduce heat path up the isolator.. this was done with a dremel with stone on it. I mounted the dremel on a hinged board so that it was able to come close to, but not touch a bit of 3mm rod mounted in a vice. I then inserted the isolator, turned on the dremel and rotated it by hand until the dremel was removing no more material... This makes for a thin spot relative to the inner hole, and eliminates the risk of grinding through.

Threaded onto the isolator is a bit of copper plate I had around, drilled and tapped M6. This is to help transfer heat out of the isolator, into the salvaged heatsink. You can see the heatsink compound on that interface.

The Heatsink is from an old power supply, the roughened black anodized texture on it makes it very powerful. It is also drilled and M6 tapped. Notice it is not touching the extruder chasis, more heat isolation at work.

Mounted is my 40mm fan, (later changed for a 30mm salvaged fan mounted in an rp printed duct. 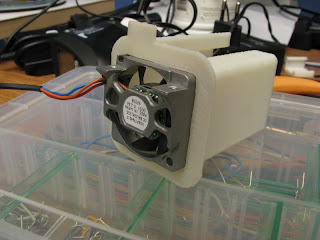 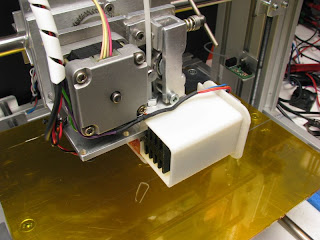 I can say that this arrangement allows virtually no heat to enter my extruder chasis. The little fan and great heatsink pulls all the heat out of my isolator before it can make it's way into the structure above.

I have not talked about resistor size in this post as it is dependent on power supply voltage. I'm using 19.5V laptop power supplies, so I am using a 10 ohm resistor. Larger power resistors are always good, but due to the fact that we are heatsinking and temperature controlling them... maximum temperature rating is far more important. Like nophead, I'm using vitreous wirewound resistors. I get mine from RS components here.


Simply drill the resistor hole out to be slightly larger than your resistor you wish to use, wrap the resistor in aluminum foil until it is a tight fit in the hole. Secure the resistor from sliding with goop, or kapton and the job is done.

To recap, I'm able to extrude through a .5mm copper hole, with a skeinforge feed speed of 60mm/s with this setup. It cools off and heats up with no problems, doesn't jam or leak. The most advanced and expensive tool used was a drill press. (needed for the isolator and nozzle, not so much for the resistor block).

If one only had a hand drill and a tap, the resulting block could be mounted on an 'old school' threaded nozzle and isolator..

The cost of the SS threaded rod as a couple of euros. The cost of the aluminum was negligeable (I used scrap), the cost of the MIG tip was less than 3 euros. I could make another one of these and be printing through it in a few hours. In fact I will for my mendel. I'll let you know about any problems I encounter mating it to a Wade's extruder on the ABS mendel carriage.

Hope this is helpful to someone.

I'll finish with images of my recent successes. 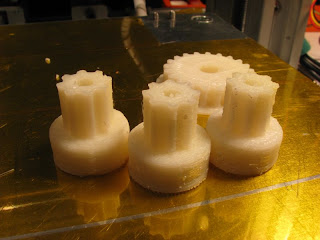 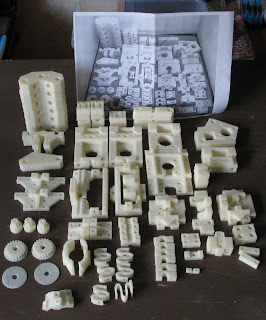 Posted by araspitfire at 3:39 AM